What Readers Are Saying…

The Magic Strings of Frankie Presto
1. What are the effects of having The Spirit of Music narrate the novel? How does it shade the story? 2. Of what significance—literal or symbolic—is it that Frankie Presto was born amidst El Terror Rojo, the Spanish civil war? How do you think the cultural restrictions and political tensions affected Frankie’s childhood? How do you think they impacted his music 3. Throughout the novel, we get glimpses of Frankie’s story from people—both real and imagined—who knew Frankie through his music. What does this array of voices and characters add to the novel? How do they add to our understanding of Frankie? 4. The narrator suggests that “everyone joins a band in this life,” likening family or other social groups to being in a band. In what ways is this true? How might it be helpful to think of life and relationships this way? 5. Cast into the river as a baby, Frankie is saved by the hairless dog. What is the role of the dog in Frankie’s life? 6. Very early in his life, Frankie shows “flashes of genius” with music. How much of genius talent is given, how much is earned? 7. In what ways might working with language—writing, reading, and speaking—be like making music? 8. Consider Frankie’s music teacher, El Maestro. What does he value most about music? How did losing his sight affect him? How does getting Frankie into his life fulfill him? 9. Beyond teaching Frankie how to play the guitar, how does El Maestro impact Frankie’s life? How does he step in when Baffa is imprisoned? What else does he teach him? 10. El Maestro tells Frankie, in no uncertain terms, that, “music hurts.” What might he mean? In what ways is this statement true or not for Frankie? Do you agree with El Maestro? 11. When Frankie shows himself to be a talented singer as well as guitar player El Maestro says that he must choose because “being both means being neither.” What does he mean? Is it true that a person can only be truly great at one thing? 12. Frankie enjoys and plays many genres of music, from intricate classical or jazz to simple, contemporary pop. What does it take to appreciate such different expressions of music? Why might many people limit their listening to a particular type of music? 13. Franco’s oppressive political regime in Spain created conditions under which “art suffers.” How can art be limited by politics? What do you think is powerful or threatening to strict political rule about art and music? How do we see music exercise that power in Frankie’s life? 14. Music is often defined as the organization of sound and silence in time. What do you think is the role of silence in music? How do we see Frankie balance sound and silence in his own life. Why do you think this is important? 15. Consider the long, romantic, and complex relationship between Frankie and Aurora York. Why do they always return to one another? What does this say about the role of forgiveness in the novel? 16. The narrator states that, “all love stories are like symphonies,” with four movements: Allegro, Adagio, Minuet/Scherzo, and In what ways is this true? Why do such relationships experience such change? 17. Frankie “grew up all over the place: Spain, England, Detroit, Nashville, New Orleans, Louisiana, California.” How does this influence him and his music? How might different places and landscapes affect an artist? 18. Despite all his talent and success, late in his life Frankie still doesn’t believe he deserves applause. Why might this be so? 19. How does Frankie and Aurora’s adopted daughter, Kai, change Frankie’s life? His music? What does Frankie mean when he tells Paul Stanley that “the older you get, the more you want your kids to know about you”? 20. The narrator, Music, claims that “all humans are musical.” Do you agree? In what ways might this be true? What do you think defines music and what role does it play in our everyday life?
Print your Guide » 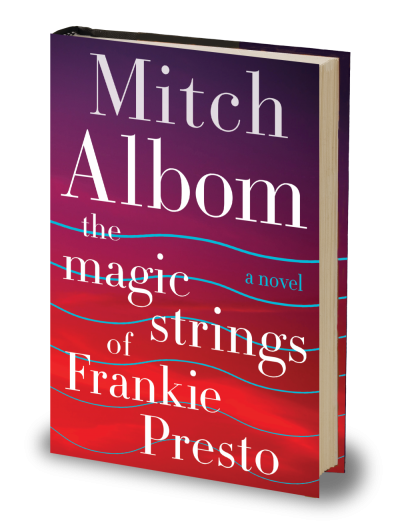