the stranger in the lifeboat 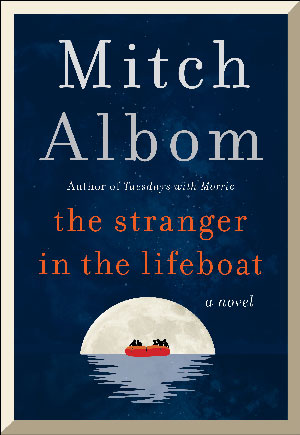 What Readers Are Saying

“An ethereal narrative resounding with themes of loss, despair, and redemption. Albom’s many fans will welcome this return to his signature fiction, which is sure to garner new admirers, too. ”
— Booklist

“Fast-paced and compelling, The Stranger in the Lifeboat is thought-provoking, hope-filled, and inspirational. It makes you ponder your deepest spiritual beliefs…Whether or not you are a spiritual person, Albom ultimately suggests that answers to our prayers may be found where we least expect them.”

“Mitch Albom’s most life-affirming and inspiring novel yet. It’ll make you question even your most firmly held beliefs.”

“Evocative, tragic and beautiful, The Stranger in the Lifeboat is a book with the potential to reach far beyond its own pages.”

Available wherever books are sold. Signed copies available from B&N, Target, and independent bookstores across the U.S.