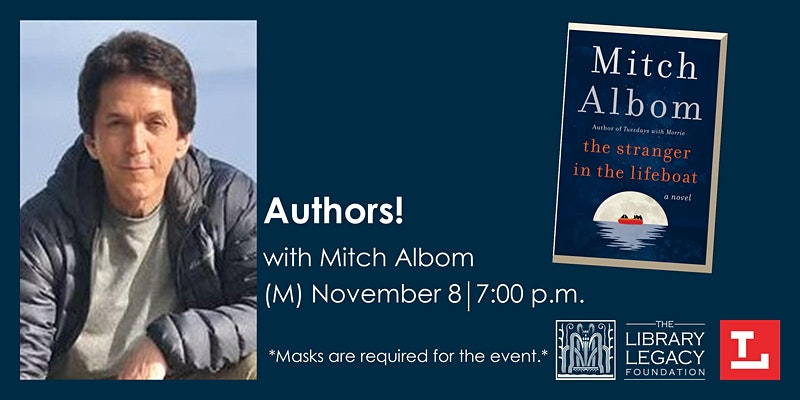 About the Presentation: The author’s presentation will be followed by a short question and answer session. After the program, the author will sign copies of the book but will NOT be posing for pictures.

About the Author: Mitch Albom is an internationally renowned and best-selling author, journalist, screenwriter, playwright, radio and television broadcaster and musician. His books have collectively sold more than 40 million copies worldwide; have been published in 49 territories and in 47 languages around the world; and have been made into Emmy Award-winning and critically-acclaimed television movies.

About the Book: An explosion on a billionaire’s yacht during a gathering of some of the world’s most influential and innovative movers and shakers leaves ten disparate souls struggling to survive in a life raft. One of them writes an account of the grueling ordeal to his beloved, and those pages are later found, washed up on an island shore on the opposite side of the Atlantic. It falls to a decidedly secular and cynical police inspector to investigate what actually happened on that raft, where it seems one man, pulled from the angry sea by the others three days after the disaster, claimed to be the Lord.

**About COVID-19 Precautions: Seating capacity has NOT been reduced, and socially distanced seating will not be available. At the request of Mitch Albom, masks worn above the nose will be required for the entirety of the event.**