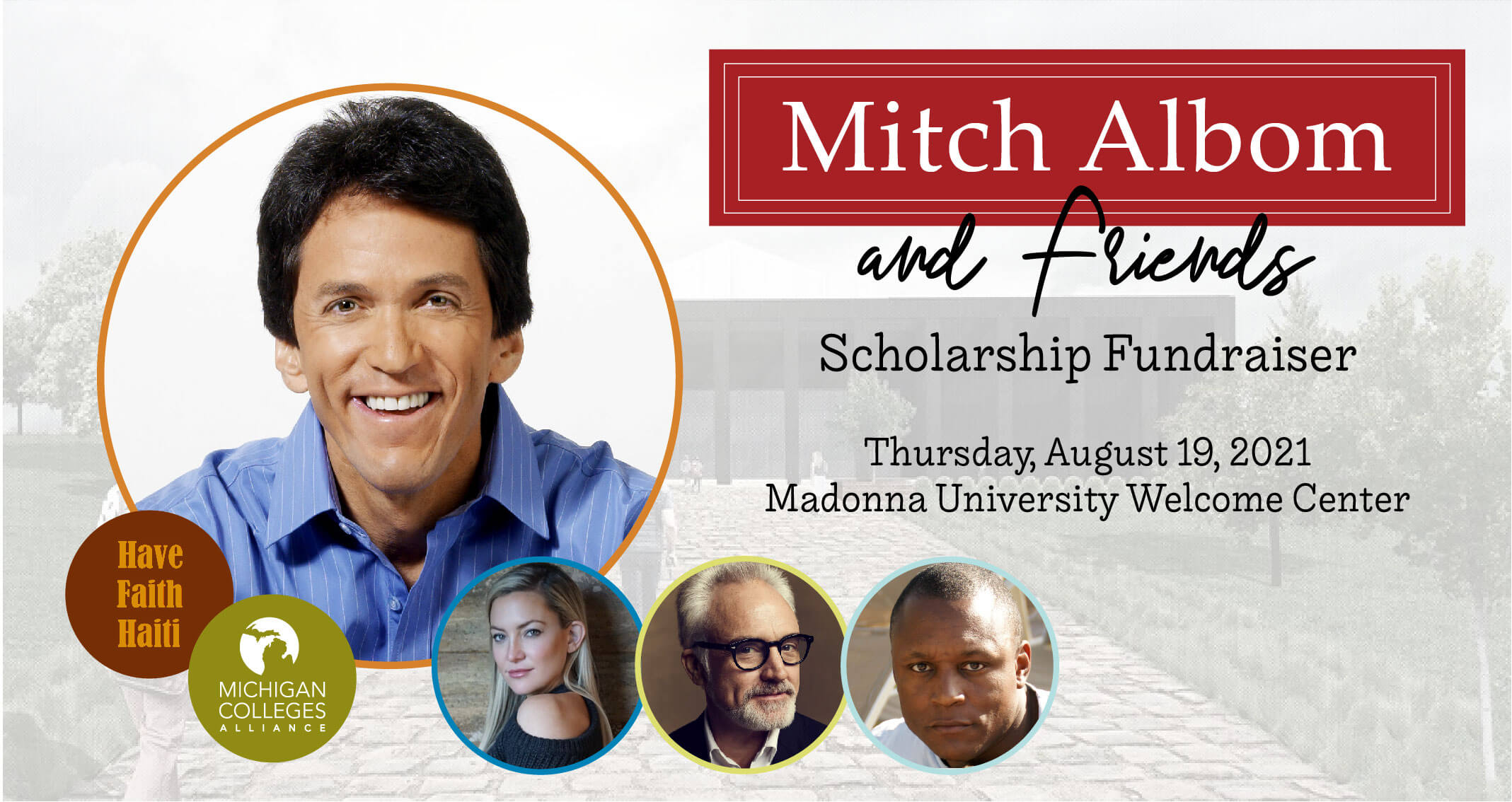 Michigan Colleges Alliance (MCA), in partnership with Mitch Albom, is pleased to announce the 3rd annual Mitch Albom and Friends – an incredible night of stories, laughter, music, and fun – live from Madonna University’s spectacular new Welcome Center.  The program will enable students from the Have Faith Haiti Mission and Orphanage to attend college at one of the 14 MCA member campuses.

Mitch has rounded up a few of his entertaining pals to join in the festivities virtually – including Golden Globe-winning actor Kate Hudson, Emmy-winning actor Bradley Whitford, and NFL Hall of Fame running back Barry Sanders!  On-stage and in-person, Mitch will be joined by local sports anchor Bernie Smilovitz and NFL Hall of Fame tight end, Kellen Winslow, Sr., as well as Madonna University students from the Have Faith Haiti Mission.  It’s all for a great cause as we raise money for the Have Faith Haiti Mission college scholarship fund!

A limited number of tickets are available for the in-person program at the new Madonna University Welcome Center in Livonia, Michigan. Or tune in virtually to the live stream!

Mitch Albom, an internationally renowned author, journalist, screenwriter, playwright, radio and TV broadcaster, and philanthropist, will be live and in person at this event on August 19. He is the author of numerous books, which have collectively sold more than 40 million copies in 47 languages worldwide. He has written seven number-one New York Times bestsellers, award-winning TV films, stage plays, screenplays, a nationally syndicated newspaper column, and a musical.

His latest work is a return to fiction with The Stranger in the Lifeboat  (Harper, November 2021).  He founded SAY Detroit, a consortium of nine different charitable operations, for Detroit’s most underserved citizens and operates an orphanage in Port-au-Prince, Haiti.

Kate Hudson is a Golden Globe Award winner and Academy Award-nominated actress, producer, entrepreneur, and bestselling author. She is best known for her roles in “Almost Famous,” “How to Lose a Guy in 10 Days,” and “Bride Wars,” which she also produced, and was nominated for a Golden Globe for her performance in “Music.” In 2013, ‎she co-founded Fabletics, a global active lifestyle brand with a mission to offer premium activewear at an accessible price.

Bradley Whitford is a classically trained stage actor who quickly gained fame on NBC’s “The West Wing.” One of the few actors working successfully and simultaneously in theater, film, and television, Whitford is one of Hollywood’s most sought-after talents. In 2019, he was awarded the Primetime Emmy Award for his work as Commander Lawrence, the architect of Gilead’s economy, in the third season of Hulu’s Emmy-winning series, “The Handmaid’s Tale.”

Barry Sanders is regarded as one of the greatest running backs in NFL history and in 2019 was named to the NFL All-Time Time as one of the great 100 players of all time. The Heisman Trophy-winning, All-American, Pro Football, and College Football Hall of Famer played 10 seasons with the Detroit Lions. He won the MVP award in 1997 for rushing more than 2000 yards in one season.