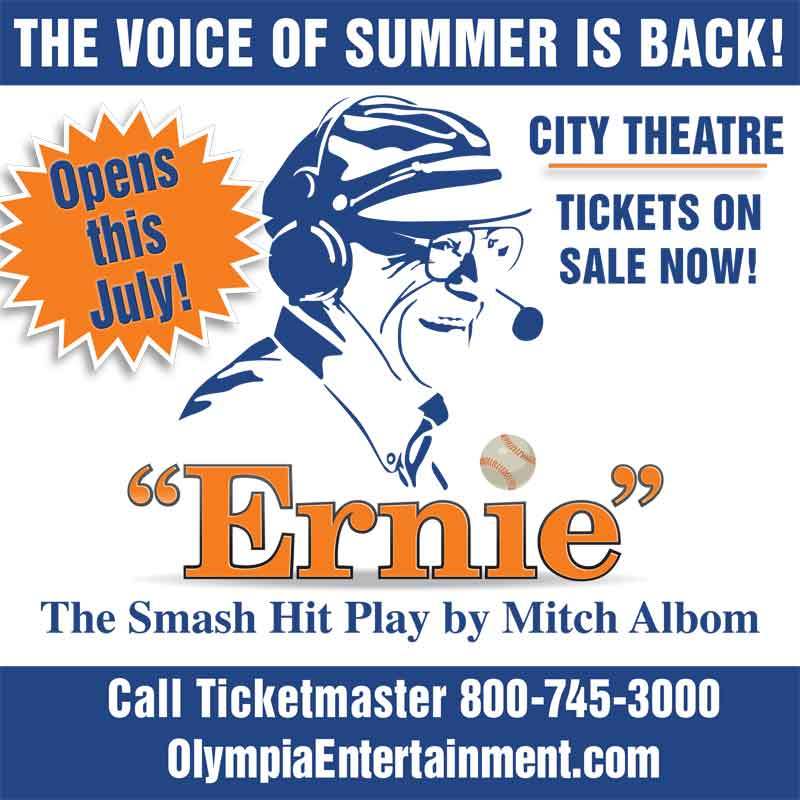 Olympia Entertainment is proud to announce that Ernie – A play by Mitch Albom, will return for a sixth unforgettable season at the City Theatre, located inside of Hockeytown Cafe. As Detroit buzzes with excitement on the verge of the 2016 Detroit Tigers’ season, Ernie invites fans to celebrate and remember “The Voice of Summer” with an opening performance on Thursday, July 28 and running through Sunday, August 14. The two-man play is dedicated to the late and beloved Hall of Fame Detroit Tigers announcer, Ernie Harwell.

Ernie’s sixth anniversary season will again feature the doubleheader experience with convenient showtimes to provide fans the ability to watch the play and catch a Tigers game in the same day. To take advantage of the “doubleheader”, patrons must present their Ernie show ticket stub at the Comerica Park Box Office. Fans can receive $5 savings on select seating and at select regular season home games. Game tickets will only be available for pick-up at the Comerica Park Box Office.

“Having Ernie return for a 6th season is a testament to the kind of person Ernie was and all that he represented, as well as our loyal audience who returns year after year for this theatrical experience,” said Mitch Albom. “We are honored to once again share Ernie’s life story, and look forward to another great run!”

The show welcomes back local favorite TJ Corbett in his role as ‘The Boy’ along with veteran stage actor Peter Carey in the lead role of ‘Ernie.’ Carey’s uncanny portrayal of Harwell, the broadcasting legend, was hailed during his leading role debut as Ernie in 2014 and again in 2015. Carey was an understudy during the play’s 2011, 2012 and 2013 seasons.

Albom, who was asked by Harwell if he’d consider a play about the announcer’s life, began writing the script after Ernie’s passing in May of 2010. The two-actor play debuted in April 2011 to coincide with the Tigers baseball season and has since become the highest-attended show in the history of the City Theatre; with more than 86,000 patrons in five seasons.

Ernie is set on Harwell’s last night at Comerica Park in September of 2009, prior to his moving thank you speech to his adopted and beloved city of Detroit.  Just before he walks onto the grassy field, he encounters an unusual boy who is eager to know all about him, coaxing Harwell into giving one final broadcast – the “broadcast of his life”.

The play features classic footage from historic baseball moments, supplied courtesy of Major League Baseball, and boasts many unmistakable Harwell calls.  Tigers fans will get a glimpse of the time that Ernie met the Great Bambino and Ty Cobb.  They’ll witness how he “recreated” games in his early days, and what was behind his broadcasts of the Tigers’ 1968 and 1984 World Series.

Episode 144 – The Gift of Forgiveness

The undying bravery when facing a monster within