A Soundtrack for Frankie Presto 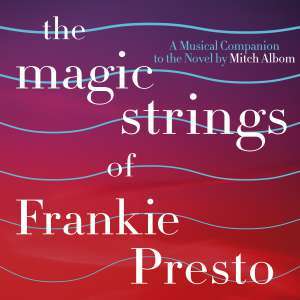 The Magic Strings of Frankie Presto will be available through Harper on Tuesday November 10, 2015.

The musical soundtrack features original songs by current recording artists including Ingrid Michaelson, Mat Kearney, Sawyer Fredericks and Phredley Brown that trace to the book’s story and were co-written with Albom—a longtime musician himself. In addition, the tracklisting boasts a number of previously released fan favorites that feature prominently in the novel. Mitch Albom collaborated directly with the artists to create a captivating companion piece to his prose. Further entwining the album and the book, Michaelson is even one of the narrative’s characters.

With each new book, Albom, the author of six straight #1 New York Times bestsellers, takes readers deeper into the universal experience we call life. He infuses both his non-fiction and fiction with an understanding of what makes us human. The Magic Strings of Frankie Presto is the book that Albom has been waiting his whole career to write: a paean to his first love—music—wrapped in the kind of inventive, compelling story that marks all his work. In his most original narrative yet, the voice of “Music” actually narrates the book.

With ‘guest appearances’ from such real-life musicians as Tony Bennett, Wynton Marsalis Lyle Lovett, Paul Stanley, Roger McGuinn, Burt Bacharach and Michaelson – all of whom collaborated with Albom – The Magic Strings of Frankie Presto is a Forest-Gump like journey through 20th century music and a heartrending tale about human connections. As lyrical and finely-tuned as its protagonist’s strings, this is a masterful work from “a writer with soul” (Los Angeles Times).

Stay tuned for more info about this one-of-a-kind musical and literary collaboration.

Mitch Albom is a bestselling author, screenwriter, playwright and nationally syndicated columnist. The author of six consecutive number one New York Times bestsellers—including Tuesdays with Morrie, the best-selling memoir of all time—his books have collectively sold more than 35 million copies in forty-two languages. He has founded seven charities in Detroit, and operates an orphanage in Port-au-Prince, Haiti. He lives with his wife, Janine, in Michigan.

HarperCollins Publishers is the second largest consumer book publisher in the world, with operations in 18 countries. With nearly two hundred years of history and more than 65 unique imprints around the world, HarperCollins publishes approximately 10,000 new books every year, in over 30 languages, and has a print and digital catalog of more than 200,000 titles. Writing across dozens of genres, HarperCollins authors include winners of the Nobel Prize, the Pulitzer Prize, the National Book Award, the Newbery and Caldecott Medals and the Man Booker Prize. HarperCollins, headquartered in New York, is a subsidiary of News Corp (NASDAQ: NWS, NWSA; ASX: NWS, NWSLV) and can be visited online at corporate.HC.com.