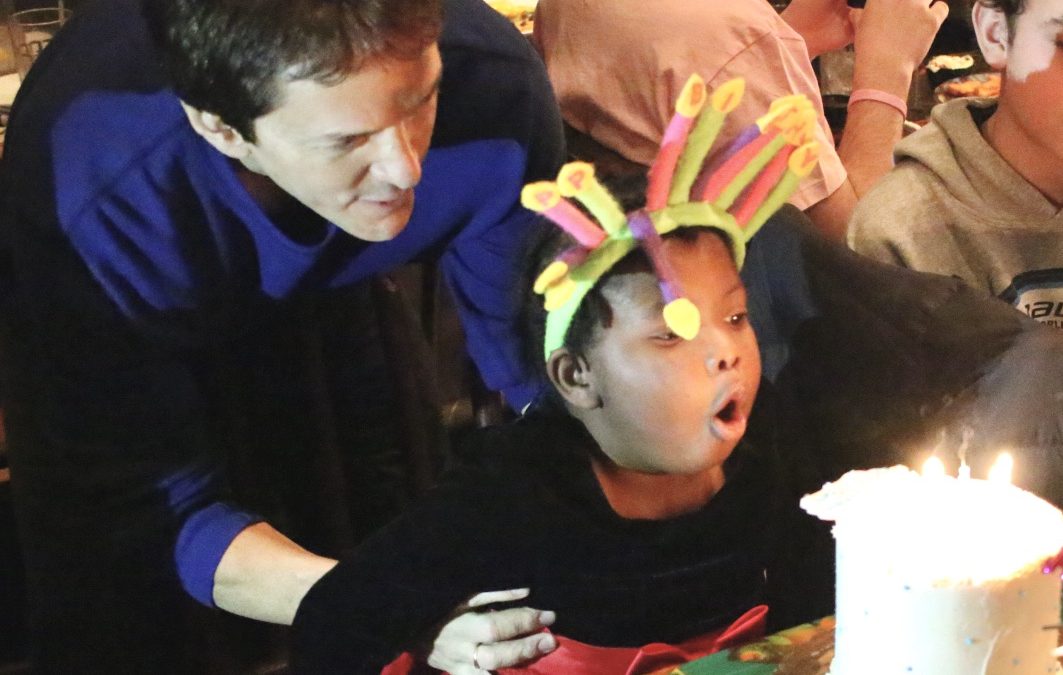 She would have turned 10 last week.

We would have had a big party, a big cake, all her friends, all our relatives.

There would have been presents and candles and a very loud Happy Birthday song, and too many people would have asked her, “How does it feel to be double digits now?” and she would have answered with something funny, or cute, or just a shouted “Good!” as she scooped a finger full of frosting.

She would have been taller than when we last saw her, for sure, and her face would be losing some of its soft, fleshy cheekiness and moving towards the beginning of adolescence. Guests would have brought her clothes instead of dolls, and remarked, “She’s getting so big!”

And we would have privately smiled, because when she was 5 years old, before she got sick, she filled out a questionnaire at the orphanage that asked, “What do you want to be when you grow up?” and that was her answer, a single word:

Chika Jeune, a Haitian orphan who we brought here when she was diagnosed with a brain tumor, never got to be big. She died when she was small, only 7, and so she will be 7 forever, even as we count her would-have-been-birthdays.

But because Chika was born in Haiti, on Jan. 9, 2010, every year that she was alive, she got to celebrate something else.

Which was 10 years ago today.

Chika was 3 days old when that tragedy struck. She and her mother were lying on a bed inside a single-room cinder-block house. Suddenly, in the middle of a hot afternoon, the earth shook. The roof of the house fell off. The walls began to crumble.

The 7.0 magnitude earthquake lasted less than a minute, yet destroyed so much of everything around them. Somehow, Chika and her mother survived. They got out and breathed and found Chika’s older sisters.

And that night, in the sugarcane fields, a bed of leaves was prepared for the baby, and Chika slept in the dirt, under the Haitian sky.

You might think that enough tragedy for any one child. But fate places no limit on suffering. And so, five years after surviving a natural disaster that killed nearly 300,000 Haitians in less than a minute, fate sent Chika a rare disease that strikes only around 300 U.S. kids per year.

Something that could have taken her life did not.

Something that shouldn’t have, did.

January comes every year, and my wife and I are reminded of both.

How do you celebrate a missing loved one’s birthday? How do you mark a date that used to be so happy and now is fraught with sadness and nostalgia? I know so many people who have lost family members, a byproduct of getting older myself, and when their birthdays come around they are filled with ennui. Some host commemorative parties. Some post old photos. Some visit cemeteries. Some just want to be left alone, to think about the years that might have been.

I have friends who died who would have been my age. Co-workers who would be coming upon their retirement parties. Yes, there’s a point at which it becomes more math than emotion (my grandfather, had he lived, would be turning 122). But you never reach that point with loved ones taken before their time.

And never with a child.

And so last week, we dug up some old videos of Chika’s birthdays. And people sent messages. And a dear friend was kind enough to make a small chocolate cake (which Chika loved) in her memory.

And just as we marked a day of birth, in Haiti today, they mark a day of death. Mothers will lament sons, fathers will mourn daughters, sisters will pray for missing brothers, and friends will cry over the days and nights they no longer share.

And some children at Chika’s former home, the Have Faith Haiti Orphanage that we operate, will yearn for parents who are no longer there, parents who have been gone now — can it be? — for a decade.

Please remember those faces today, as on other days we will remember faces from our own lives, and the days we no longer have with them, the candles we no longer get to blow out.

Contact Mitch Albom: malbom@freepress.com. Check out the latest updates with his charities, books and events at MitchAlbom.com. Download “The Sports Reporters” podcast each Monday and Thursday on-demand through Apple Podcasts, Google Play, Spotify and more. Follow him on Twitter @mitchalbom.

Giving shelter, from a shelter, a mother earns this special day

Judging truth should not be a government enterprise

Matthew Stafford will always be at home in Detroit, even after whirlwind year