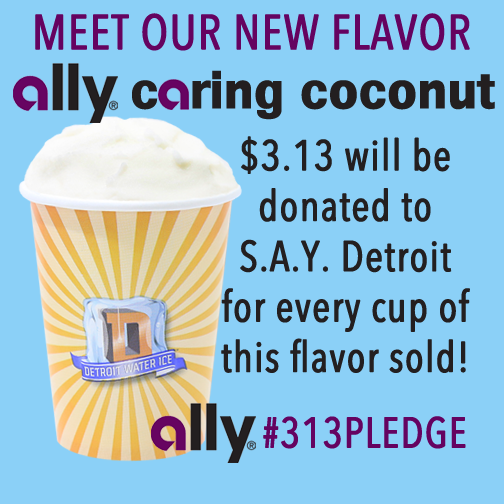 For the second time this year, Ally Financial has made a #313Pledge to Detroit through the Detroit Water Ice Factory: for every cup of the new flavor Ally Caring Coconut sold, $3.13 will be donated to S.A.Y. Detroit, which provides food, shelter, medical care, education to Detroit’s neediest citizens, especially children, veterans, senior citizens and the homeless.

“With the launch of Ally Caring Coconut, we hope to engage the Detroit community in a larger effort to give back,” said Gina Proia, chief communications officer and head of corporate citizenship at Ally. “The contributions of Mitch Albom and The Detroit Water Ice Factory have made a meaningful impact on Detroit, and we hope that the support from patrons and the continuous proceeds from this initiative will help amplify their efforts in the city.”

Ally’s relationship with Detroit Water Ice began earlier this year in conjunction with the company’s move to Ally Detroit Center, inDetroit’s business district. To further demonstrate its commitment to the city, Ally launched the 313 Pledge to donate $3.13 to S.A.Y. Detroit for every Detroit Water Ice sold for the month of April. The pledge sparked excitement from the community, which led to the expansion of the program and the development of the new Ally Caring Coconut flavor.

“Corporate citizens like Ally are extremely important to Detroit and to providing much needed resources for families in need in our city,” said Mitch Albom, author and founder of The Detroit Water Ice Factory. “We are pleased that Ally has added Ally Caring Coconut to our menu, and that the 313 Pledge and all of its proceeds will be extended through the rest of 2016.This is a big win for our community.”

The new Ally Caring Coconut flavor debuted during the 58th Annual Fireworks display in downtown Detroit on Monday to symbolize Ally’s continued commitment to the city.

With approximately $156.5 billion in assets as of March 31, 2016, Ally operates as a financial holding company. For more information, visit the Ally media site at http://media.ally.com or follow Ally on Twitter: @Ally

About S.A.Y. Detroit and The Detroit Water Ice Factory

S.A.Y. Detroit (Super All Year) was founded by best-selling author and journalist Mitch Albom in 2006 and operates as a 100 percent dollar-in-dollar-out charity. In partnership with the Detroit Rescue mission, S.A.Y Detroit provides an “umbrella” of resources serving everyone from newborns, teens, senior citizens, our honored veterans, and the homeless. Learn more about S.A.Y. Detroit at www.saydetroit.org

In 2015, Albom created The Detroit Water Ice Factory, following the “Newman’s Own” model of philanthropy. Its mission is to offer a delicious, top-of-the-line food product, with the sole goal of raising funds to help others.