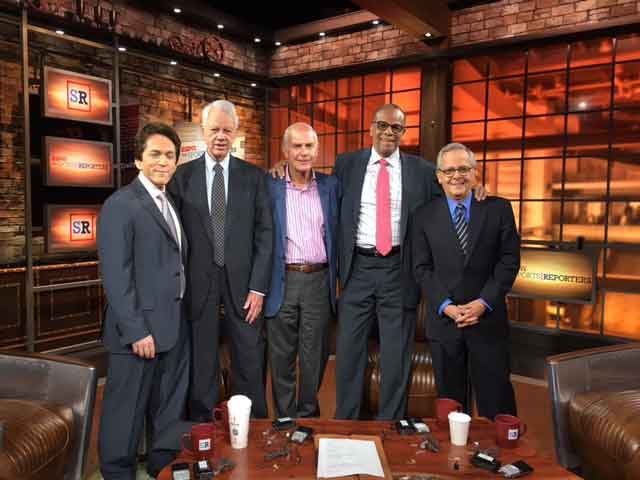 Today, for the last time, I will rise early, put on a suit and tie, and sit with colleagues as a TV host says, “Welcome to the Sports Reporters … .”

Different people have said this over the decades. A guy named Gary Thorne said it first, back in 1988. Dick Schaap said it all through the 1990’s. When Dick died in 2001, John Saunders said it. And when John died in 2016, Mike Lupica said it.

Which means, by definition, it is a tradition, and ESPN’s The Sports Reporters was a tradition for many people, one I have been honored to be a part of for a quarter century.

It stops today. The Last Civil Sports Conversation will end not because it is failing or lacks ratings or even a sponsor. It has all that. But someone up high makes a decision and a program departs. That’s TV. You don’t own the time, or the space.

But you do own your history. And regulars on this show should be rightly proud of theirs.

It was a simple idea. Collect sportswriters, put them around a host, let them debate, and end with 60-second commentaries called “Parting Shots.” This may seem incredibly basic today. But when we started, long-form opinion in TV sports was novel. (Only one other syndicated show, The Sportswriters on TV, was trying it.)

Fact is, in the early days, ESPN was often squeamish about the “edge” of these outside writers.

That may shock fans of First Take, Pardon The Interruption or Around the Horn, where edge is highly valued. But all those shows, and most of the people they now make famous, had their roots on The Sports Reporters.

Tony Kornheiser? Mike Wilbon? Stephen A. Smith? Sat next to all of them on The Sports Reporters. Skip Bayless? Adam Schefter? Jemele Hill? Same thing.

The Sports Reporters was like Gregg Popovich’s bench or Bill Walsh’s sideline. A launching pad for even bigger careers.

A handful of us remained there. Lupica (of the New York Daily News), Bob Ryan (of the Boston Globe) and I have done the most number of shows together. We will be there today, with Bill Rhoden of the New York Times. Added together, we have over 140 years of sports writing experience. I’m pretty sure this will be the last TV show to claim that.

Dizzy Gillespie, the jazz trumpeter, once said, “It has taken me all my life to learn what not to play.” Perhaps, in explaining the uniqueness of The Sports Reporters, it is easier to say what it was not.

It was not a set where you had to throw footballs in your suits. It was not a place for telestraters, chalkboards, highlight films or blocking schemes. It was not a stats analysis. It never spoke of fantasy leagues.

It was not a landing spot for former athletes. It was not fodder for commercials. In fact, in all my time there, I don’t believe a commercial was ever made for the program.

It was simply 30 minutes of serious, thoughtful and civil sports discussion. If on a given week, we did not reach those goals, we reset them for the Sunday that followed.

It was an honor to sit in that chair

Which is not to say there weren’t laughs. There were plenty. From having to bang on an entrance door when we shot in lower Manhattan, to seeing Schaap talk with his mouth full of bagels and cream cheese, to shivering in pre-dawn darkness at Super Bowls, to doing fake sports answers with an old immigrant accent, which I do between takes to make Lupica crack up.

We enjoyed a long-time producer, Joe Valerio, who kept uniformity to the show, and were blessed by Schaap and Saunders, who made all boats rise with their elegance, brevity, intelligence and wit.

It wasn’t THAT good.

But it was an honor to sit in that chair. There’s been talk about a Sports Reporters podcast and even another network picking up the show. I hope that happens, because 29 years of anything should not be casually discarded.

But for now, it’s one final suit and tie, and a farewell seat in The Last Civil Sports Conversation. I don’t yet know what today’s parting shots will say, but they should all include these five words: thank you for the privilege.

Contact Mitch Albom: malbom@freepress.com. Check out the latest updates with his charities, books and events at mitchalbom.com. Catch “The Mitch Albom Show” 5-7 p.m. weekdays on WJR-AM (760). Follow him on Twitter @mitchalbom. To read his recent columns, go to freep.com/sports/mitch-albom.

In my world, the Detroit Lions are still playing — and winning