Ernie and Hockey are Back for a Summer Series 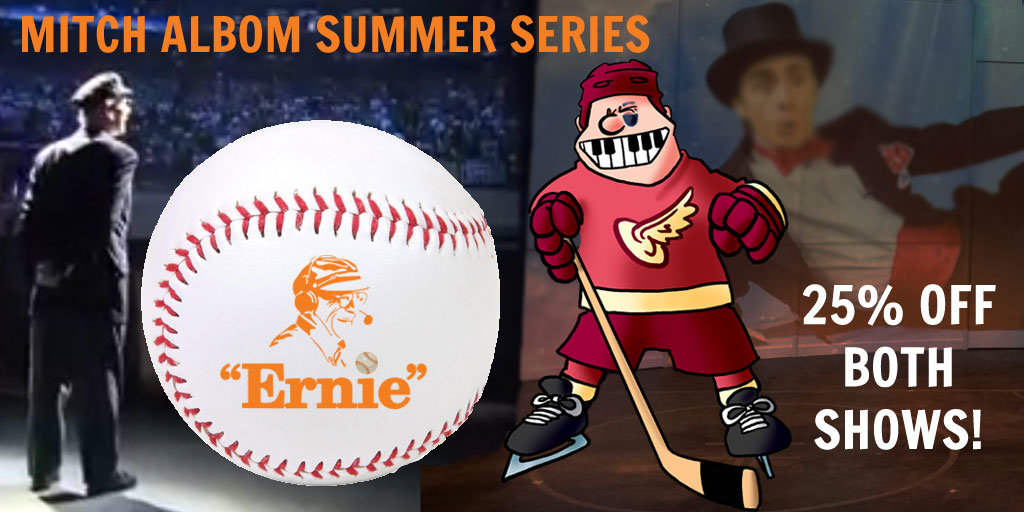 Back by popular demand, Mitch Albom’s original plays Ernie and Hockey – The Musical! will return to City Theatre inside Hockeytown Cafe. Ernie, about the legendary Detroit Tigers announcer, will return for its seventh year beginning Thursday, June 8 through Sunday, June 25.  Hockey – The Musical!, which premiered last summer, will play Thursday, July 13 through Sunday, August 6, before traveling to Traverse City, Grand Rapids, and East Lansing.

“We are thrilled to be bringing back “Ernie” and “Hockey – The Musical!” to our favorite “home” – the City Theatre,” said Mitch Albom. “Audiences have been amazingly responsive to “Ernie” for the last six years, and embraced “Hockey” beyond our expectations last summer. Traversing the warm, moving story of Ernie Harwell and the bawdy, crazy, foot-tapping world of ‘Hockey” represents our best efforts at a broad spectrum of theatrical entertainment. We look forward to welcoming new audiences and familiar “second-time-around” faces this summer.”

While individual tickets are not yet on sale, a special 25% discount for show goers who wish to see both performances is available now for individuals and groups of 8 or more through Olympia Entertainment Group Sales by calling 313-471-3099.

Groups of 8 or more who wish to see either show may also receive a 20% discount by calling Group Sales.

Ernie’s seventh anniversary season will again feature the doubleheader experience with convenient showtimes to provide fans the ability to watch the play and catch a Tigers game in the same day. To take advantage of the “doubleheader”, patrons must present their Ernie show ticket stub at the Comerica Park Box Office. Fans can receive $5 savings on select seating and at select regular season home games. Game tickets will only be available for pick-up at the Comerica Park Box Office.

An on-sale date for individual tickets for both shows will be announced at a later date.