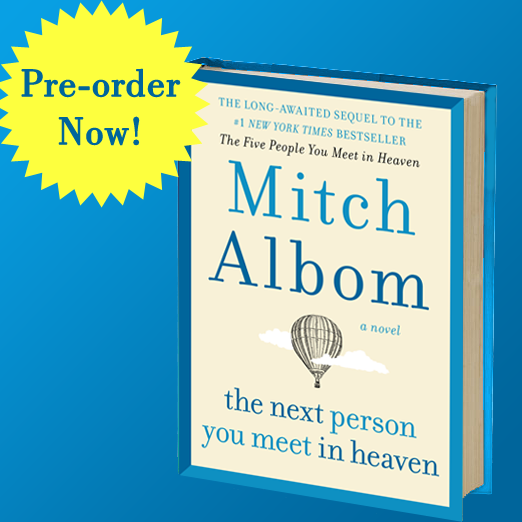 On October 16, 2018 Harper, an imprint of HarperCollins Publishers, will publish THE NEXT PERSON YOU MEET IN HEAVEN, the long-awaited sequel to the mega bestselling The Five People You Meet in Heaven and the latest novel by #1 internationally renowned and bestselling author Mitch Albom.

Fifteen years ago, in Albom’s beloved tale, The Five People You Meet in Heaven, the world fell in love with Eddie, a grizzled war veteran-turned-amusement park mechanic who died saving the life of a young girl named Annie. Eddie, who felt his life was meaningless, journeyed to heaven and encountered five people from his time on earth him who showed him every life matters, and we touch each other in countless, unimaginable ways.

Now, in this enchanting sequel, Albom reveals what happened to Annie, the little girl, how her world changed after the accident, and what awaits her when she eventually makes her own journey to heaven and reunites with the man who saved her.

Through this unforgettable sequel, we learn how the accident that took Eddie’s life took something from Annie as well: her left hand – which needed to be surgically reattached. She also lost any memory of the accident, wiped out by the trauma.

Scarred and confused, Annie is whisked away by a guilt-ravaged mother to start a new life, far away from the world she knew. Bullied by her peers and haunted by something she cannot recall, Annie struggles to find acceptance as she grows. She makes mistake after mistake, and comes to feel she is fated to a life of trying but failing.

Then, in her early 30’s, she reconnects with Paulo, her childhood love, and believes she has finally found happiness. But when their wedding night ends in an unimaginable accident, Annie begins her own heavenly journey—and the inevitable reunion with Eddie, who is now one of the five people to illuminate her life, much the way his was illuminated by others.

“Over the years, more than any book I’ve written, readers have asked me ‘What happened next to Eddie and Annie?” Albom says. “Although I’ve never done a sequel before, I felt there was a natural story about Eddie going from meeting five people to being one of five for somebody else. And exploring how a girl lives once she’s saved from death was very appealing material. So I dove in – and I was surprised where it took me.”

Poignant and beautiful, filled with unexpected twists, The Next Person You Meet in Heaven reminds us that our mistakes are not always what they seem, and every ending is also a beginning—we only need to open our eyes to see it.