In Memory of Ira Albom 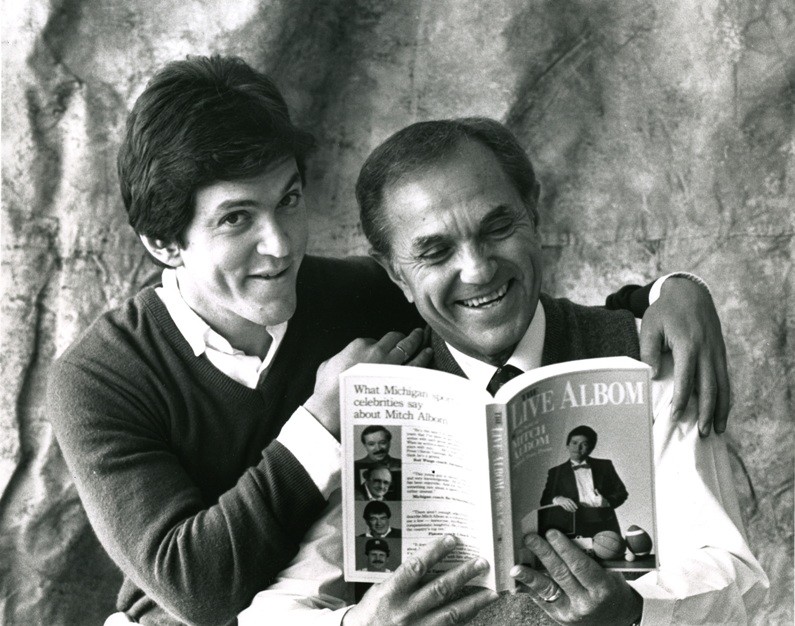 Mitch and his dad, Ira

Friends, today is one of the saddest days of my life. My beloved father, Ira Albom, passed away last Friday after a long health battle. This afternoon, we will bury him beside my mother, Rhoda, who died nearly three years ago. Dad was lost the moment he said goodbye to her.

And am I lost now.

Cast adrift. That’s how it feels. Roots severed. No parents in the world. Talking with my sister and brother, we all agree that we are not ready to be the grown-ups, not ready to say goodbye to being someone’s child on this earth.

Yet we dare not complain. For we – and the world – were blessed with my father for 88 years. He was good and moral and strong and warm and while my happy hurricane of a mother urged me to all the good things I could be, my father is the reason for all the bad things I am not. I could always look up and see him as an example. If he restrained himself from violence, disrespect, coldness, insensitivity, then how could I do less?

“A man doesn’t do that,” he would often say about negative behavior. He was that paternal role model that so many kids don’t get today. How can I complain after having him all this time?

My Dad was born in 1929, just in time for the Great Depression, which is probably why he rarely complained later in life. The son of an immigrant plumber, my Dad was the first to attend college in his family. He was forced to be a man before he got to be a teenager, taking over the family responsibilities for my mother’s home when her father suddenly dropped dead and her mother fell into depression. He handled it. He always handled things. Dad was constructed of old-fashioned materials– family love, self-discipline, hard work, quiet suffering. He raised us and he raised many others, family and strangers gravitated to him, they felt protected under his wing. He helped them, paid for them, advised them, loved them.

He was a great singer, and could have joined the opera, his dream, but instead fought for his country during the Korean War and took an accounting job to support my mother and the coming children. Some of my most precious memories over the years are playing piano in the basement for him while he prepared songs for a family wedding or party. He liked to sing slowly. Really slowly. Whenever I tried to pick up the pace he’d say, “Too fast, Mitchie. Too fast.” This was during a ballad. To him, the word “ballad” meant “slow down by 50 percent.”

I loved to hear him sing and loved to him tell stories about travelling the world. I loved to hear the respect he showed strangers. He always wanted coffee the moment he sat down in a restaurant, but if the service was slow, he’d politely read the server’s name on a badge and say, “Excuse me, Charlene, I wonder if we could get that coffee now? Thanks very much.”

Ever mannered. Ever respectful. Ever aromatic. Yes. My Dad smelled good all the time. So many people have sent me memories of him mentioning his cologne or aftershave. It was part of the respect he showed the world. He smelled good. He dressed impeccably. People joked that he wore a suit to bed. But it was part of his quiet dignity.

I saw the beauty of that when, in his late 40’s, prime of his career, his company cruelly fired him after nearly 19 years of service, one year shy of making his pension for life. As a bone, they said he could use an office for a few months to make calls for another job.

Many men would have told them to shove it. But my father never complained. He put on a suit every morning and drove all the way there and said good morning to the people he used to manage, never losing his self-esteem, and he spent the day searching for new work to feed our family until he found something. When I asked him how he did this without being embarrassed, he shook his head at me and said, “They don’t control embarrassing me. Only I can do that.”

His dignity, as always, came from within.

More than anything in life, my father adored my mother. They met when he was 16, she was 15, and they never dated, kissed, or had eyes for anyone else. My father so respected, honored and cherished my Mom, that our next-door neighbor used to joke, “When I die, I want to come back as Ira Albom’s wife!”

They were married on Christmas Eve, 1950, the only night they could afford to rent out a restaurant for the ceremony, and this Christmas Eve, they will celebrate their 67th anniversary in heaven, together, because they only belong together. True to his heart, my father wanted a picture of the two of them on my mother’s grave stone, and when we’d visit the cemetery, he’d see himself smiling next to her, and he’d say, “I’ll see you soon, babe.”

Today, he formally joins her. But I guess he never really left her, as I know he will never really leave us. Our hearts are broken. Our souls are bowed. But our lives have forever been enriched with love and guidance and wisdom and principle.

The family has kindly requested no flowers or gifts. If someone desires, a donation to help sick children at the Have Faith Haiti orphanage can be made in Ira Albom’s name at www.thechikafund.org.