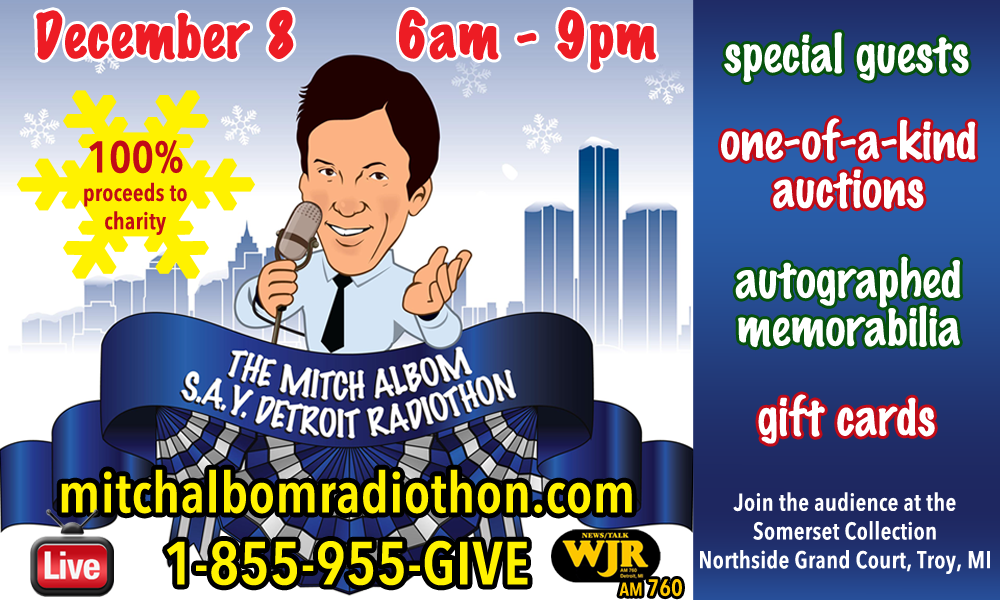 In its fifth year, the radiothon will be broadcast for 15 straight hours on WJR-AM(760), running from 6 a.m to 9 p.m. The event, hosted by WJR’s Albom and Ken Brown, will be streaming live to watch at facebook.com/MitchAlbom, saydetroit.org, freep.com, clickondetroit.com, and wjr.com, with frequent cut-ins on WDIV-TV Channel 4. The public is invited to attend the event at Somerset.

Donors can call 855-955-GIVE (4483) or log on to mitchalbomradiothon.com to donate or bid on auction items. Listeners may also follow the conversation on social media using #SAYDetroit #radiothon.

“The radiothon has become a huge event for us at S.A.Y. Detroit, something we plan and look forward to all year,” said Albom, who founded S.A.Y. Detroit in 2006. “Michiganders have been incredibly generous over the last five years, and we humbly hope they join us again on Dec. 8. We promise to continue to allocate 100 percent of funds raised to the needy and the programs that serve them and make our donors proud of the good they are doing for so many who need help.”

More than $1 million in donations were raised at the 2015 radiothon; funds were distributed to 20 area charities last March.

S.AY. Detroit was founded in 2006 by best-selling author and journalist Mitch Albom. Operated in partnership with the Detroit Rescue Mission Ministries, S.A.Y. Detroit (Super All Year) – a 501 (c) (3) charity – and its group of non-profits are committed to helping improve the lives of Detroit’s neediest citizens. All administrative costs are paid privately.