(DETROIT– September 15, 2015) — Mitch Albom will host an evening of entertainment and storytelling to benefit S.A.Y Detroit and the launch of his newest novel The Magic Strings of Frankie Presto at the Fox Theatre on Sunday, November 8 at 7 p.m. The event will be a mix of performances and conversations between Albom and a wildly impressive line-up of music-related guests including Sawyer Fredericks (winner of The Voice), Earl Klugh, Ted Nugent, Michael Bolton, JK Simmons (Oscar winner for “Whiplash) jazz guitar star John Pizzarelli, Phredley Brown (musical director for Bruno Mars), Roger McGuinn (founding member of the Byrds) and local musicians Olivia Millerschin and Vito Lafata, as well as others. (Lineup is subject to change.) 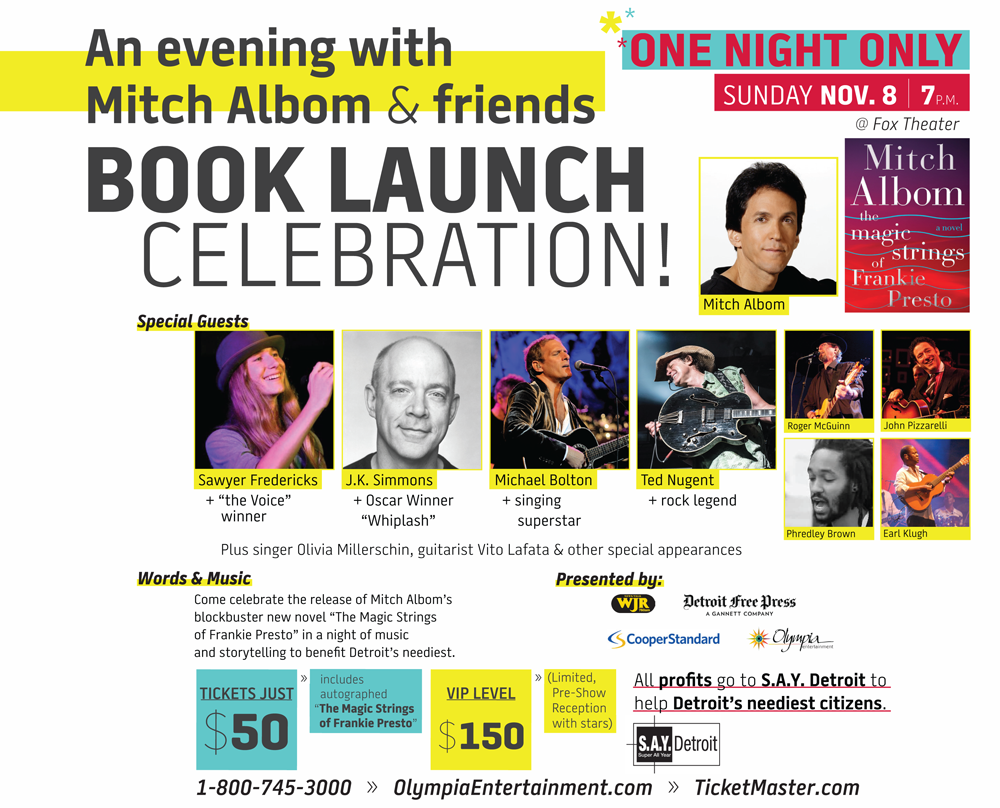 Tickets ($50, $150 VIP) go on sale Saturday, September 19 at 10 a.m. and can be purchased at OlympiaEntertainment.com, The Fox Theatre and Joe Louis Arena box offices, Hockeytown Authentics in Troy (without service charge) at all Ticketmaster locations and Ticketmaster.com. To charge tickets by phone, call (800) 745-3000. Discounts are available on select seats for groups of 10 or more, call 313-4713099 for details. A limited number of VIP tickets are available, which include a pre-show meet and greet event. All guests will receive an autographed first printing copy of The Magic Strings of Frankie Presto by Mitch Albom.

The Magic Strings of Frankie Presto is about a fictional guitar player who changes lives with his music, and to that end, Albom is organizing a celebration of music, guitars and Detroit, all to benefit needy Detroiters through the charities of S.A.Y. Detroit.

S.A.Y. Detroit, formed in February 2006, is a fully formed 501(c) (3) charity aimed at improving the lives of the neediest citizens, through shelter, food, medical care, volunteer efforts and education. It serves as the umbrella for ongoing major projects including A Time to Help, S.A.Y. Detroit Family Health Clinic, and Working Homes/Working Families, and funds dozens of projects for Detroit-area Agencies.